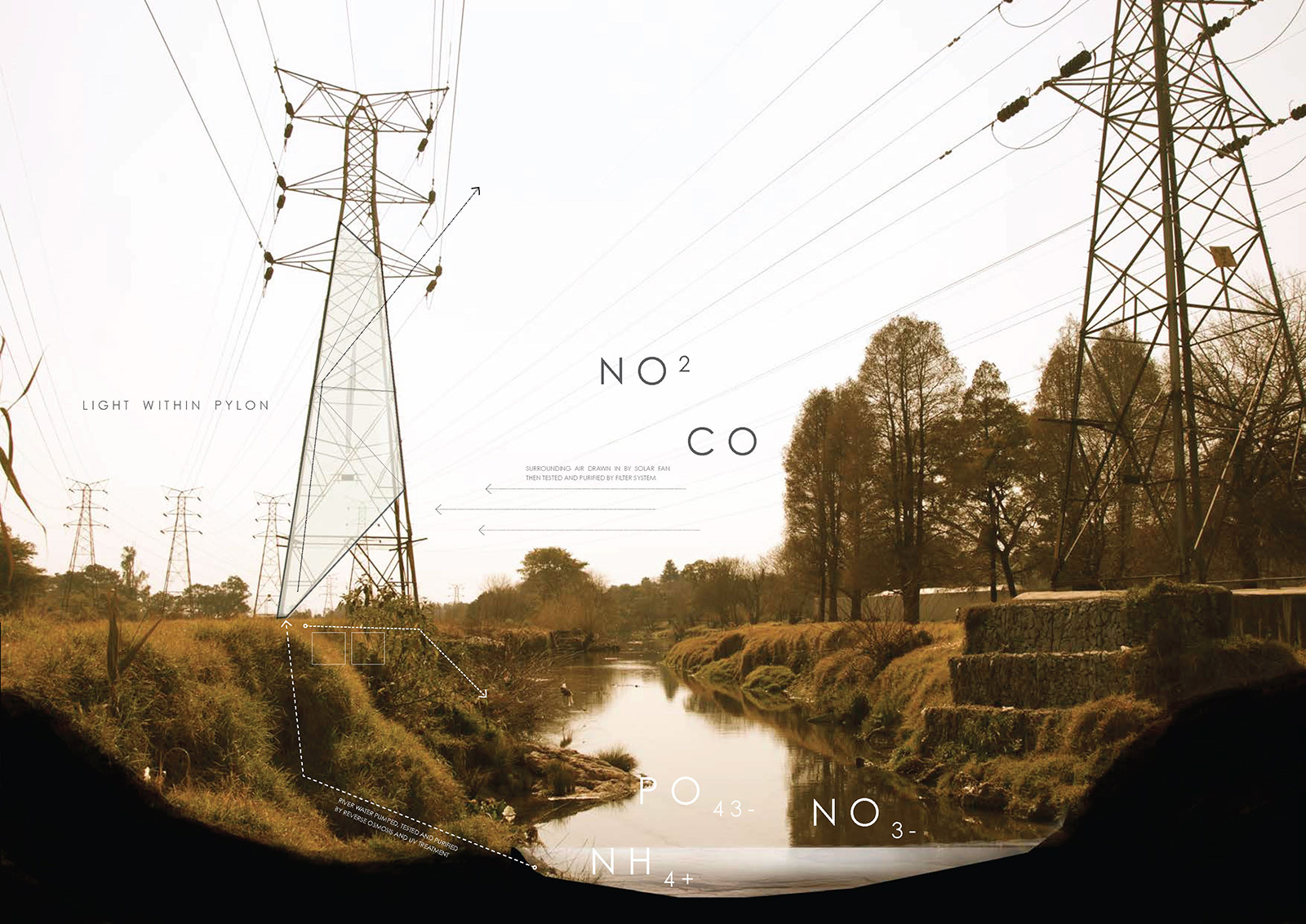 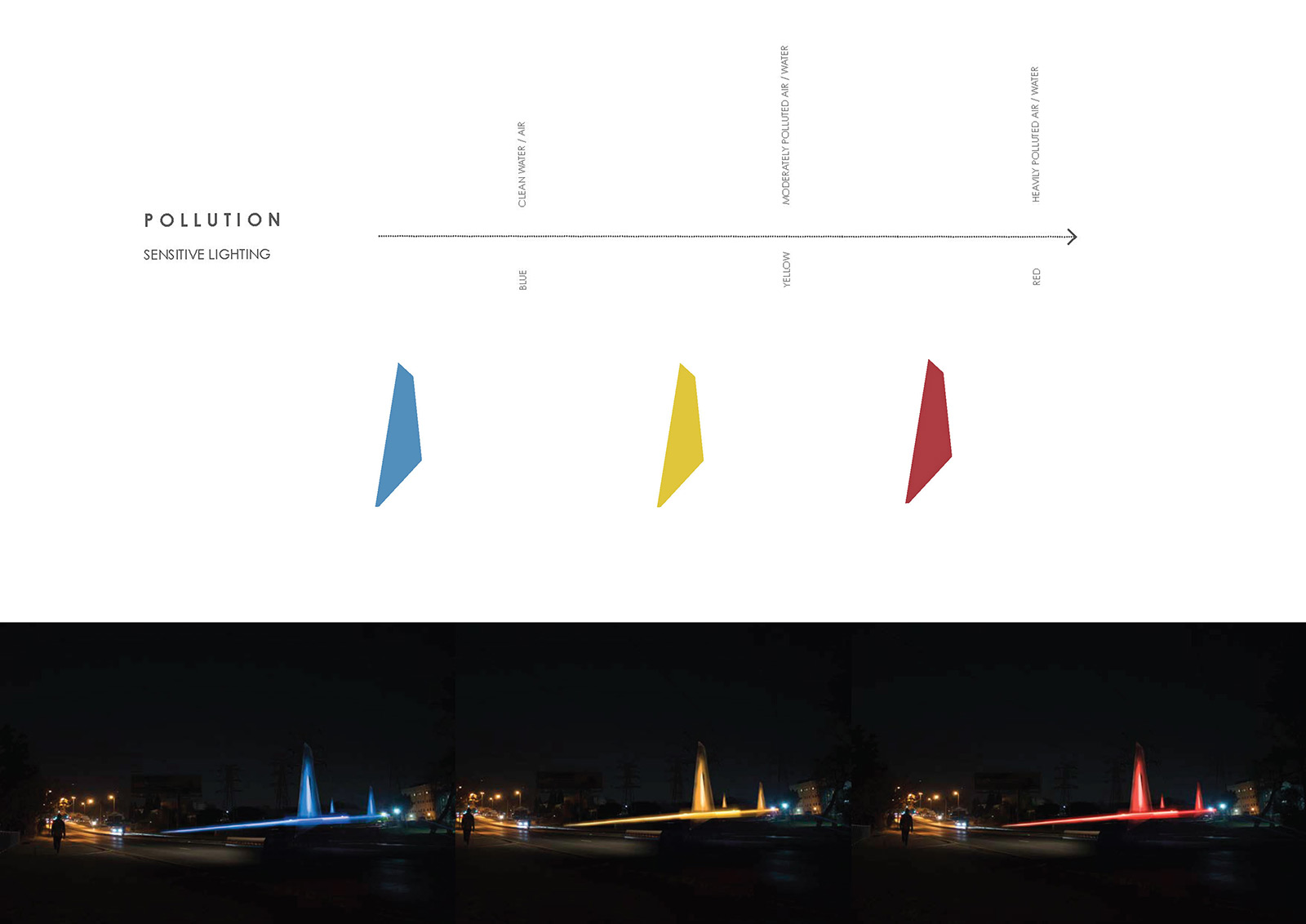 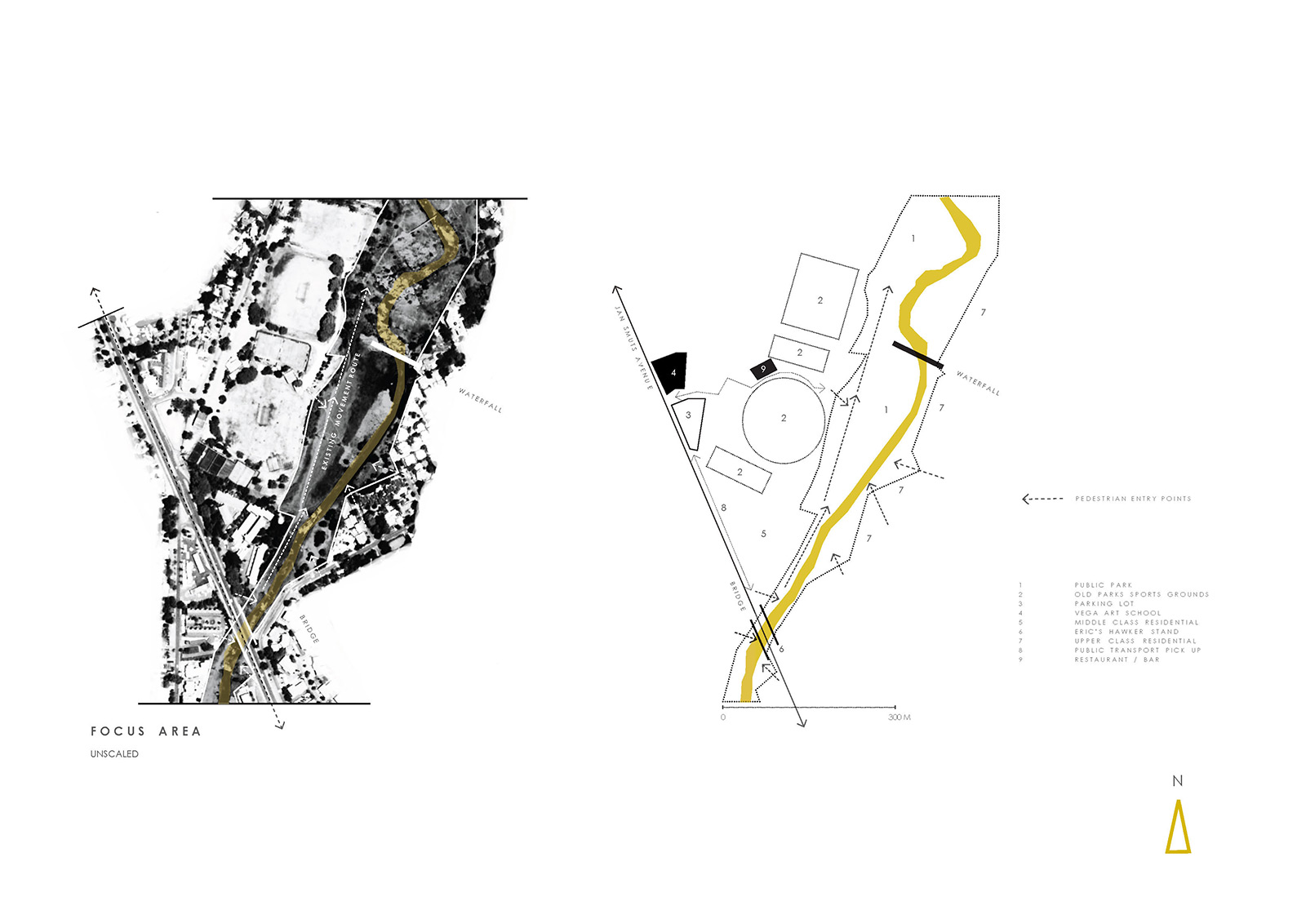 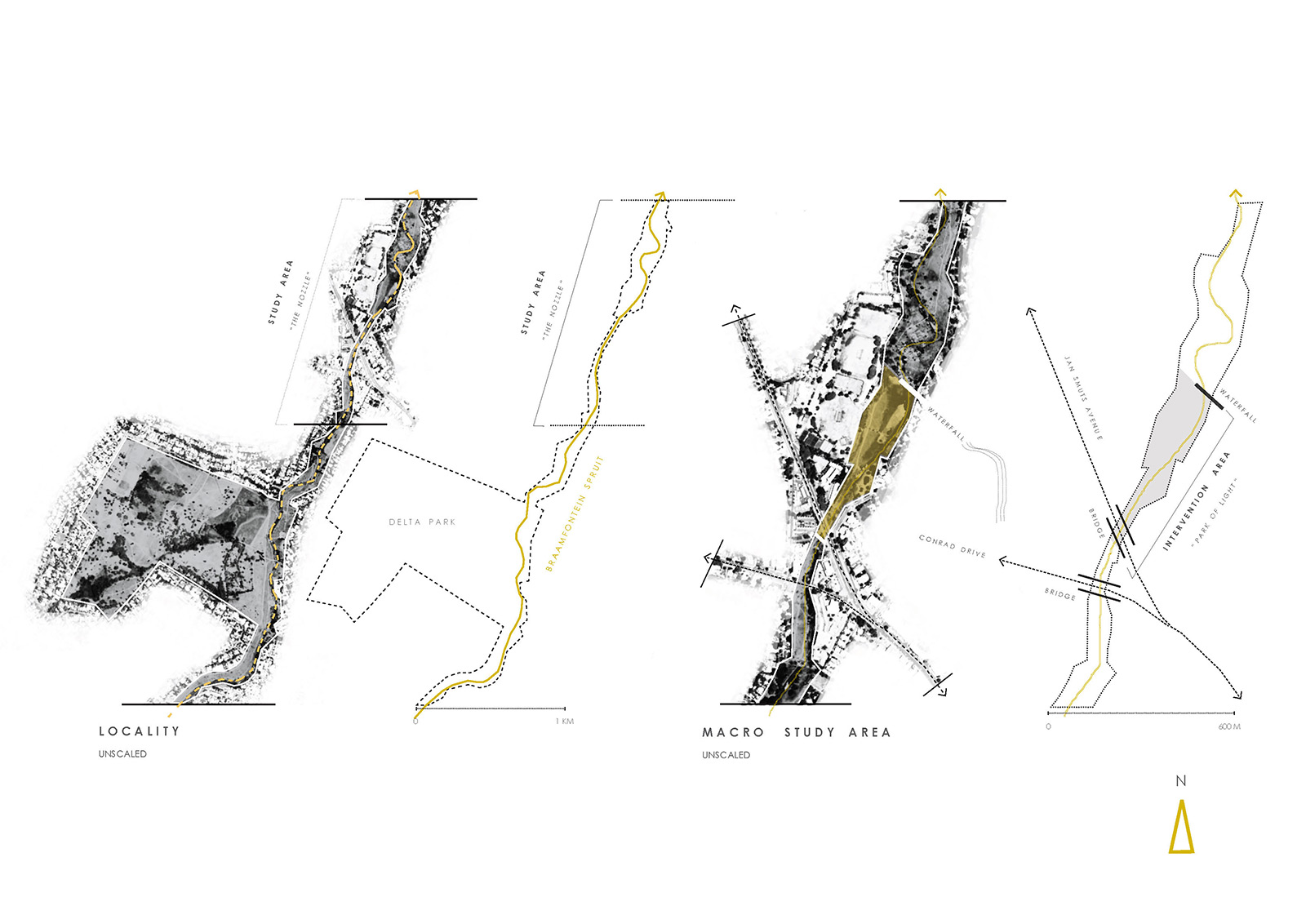 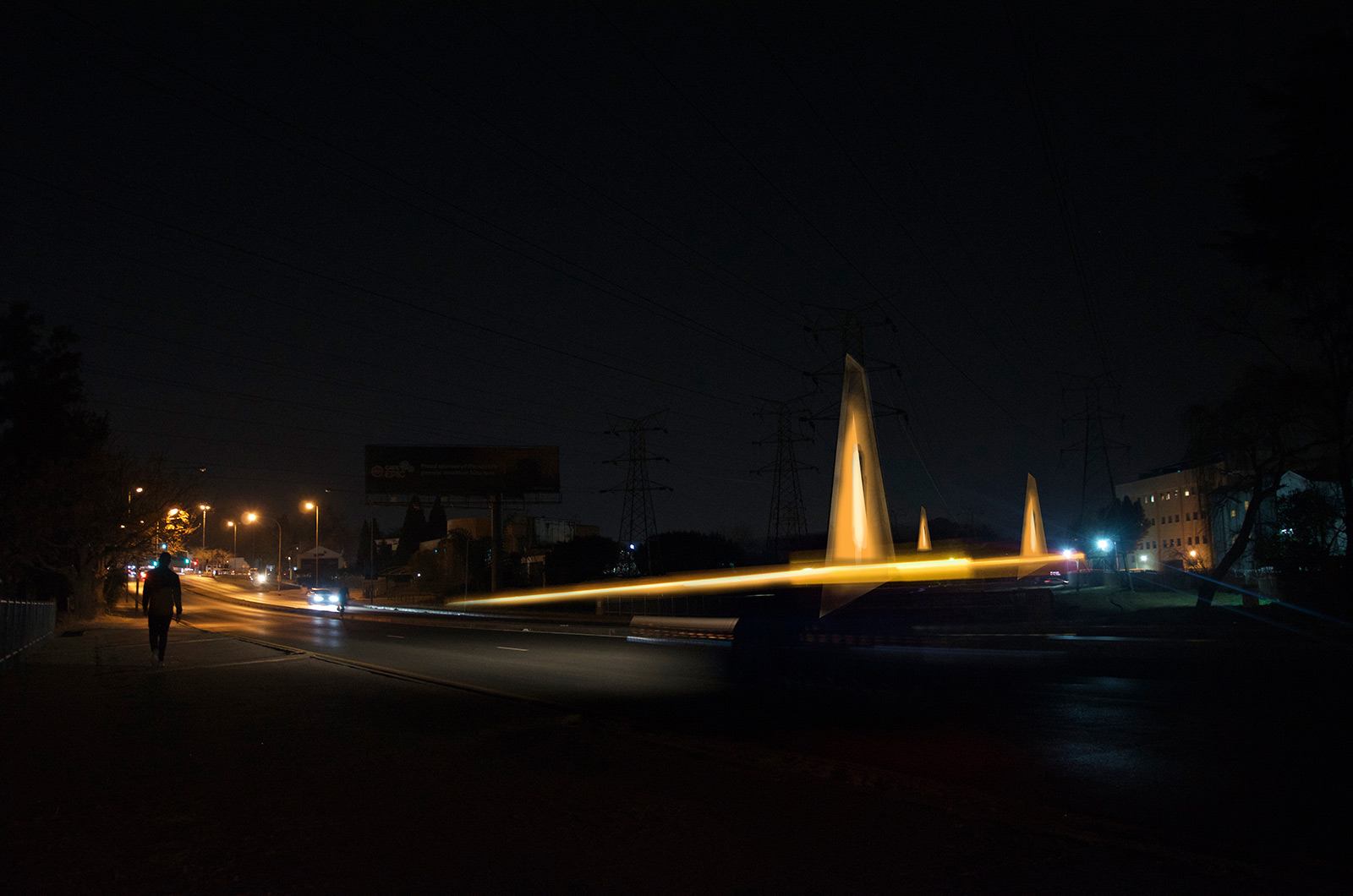 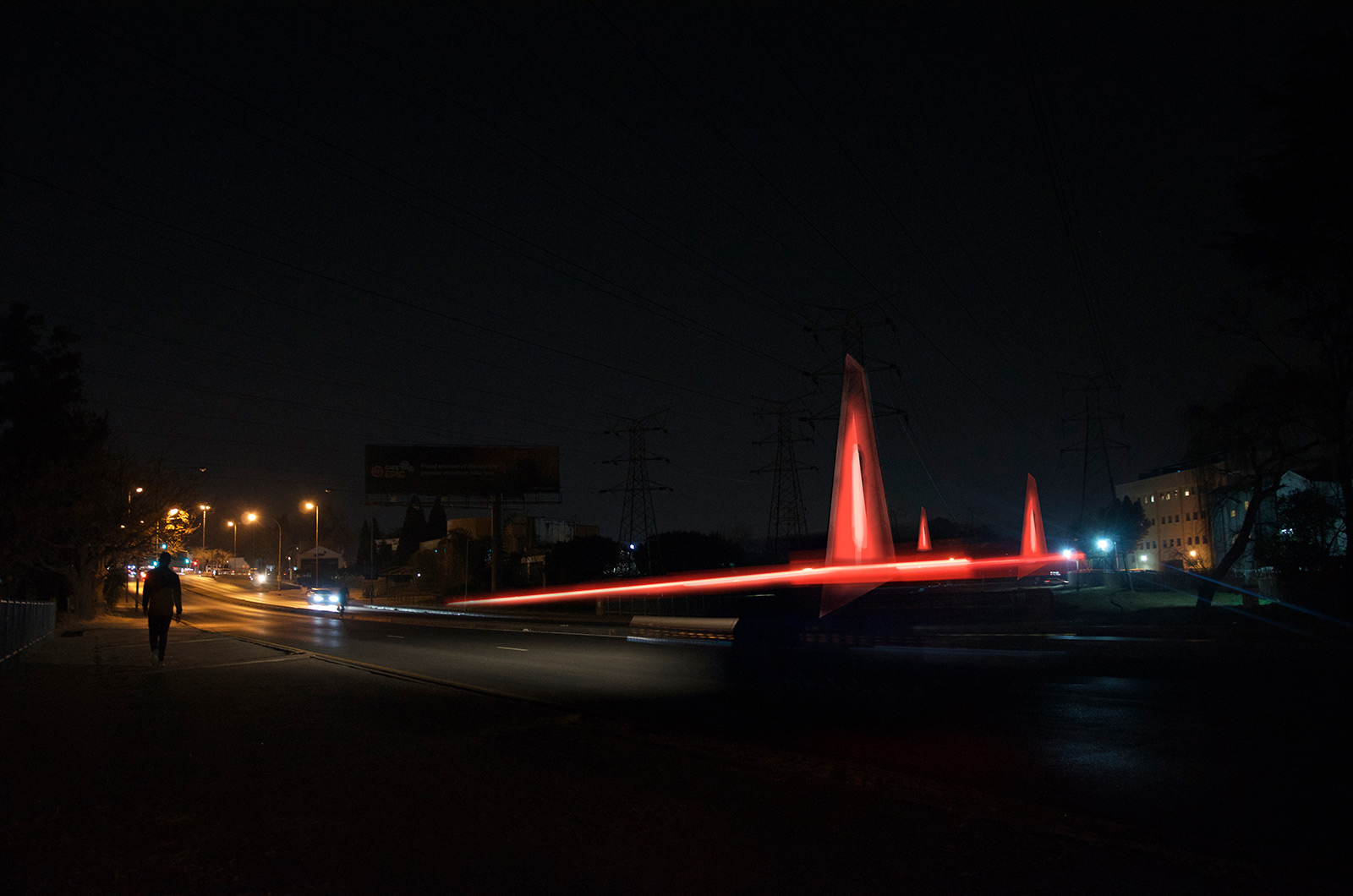 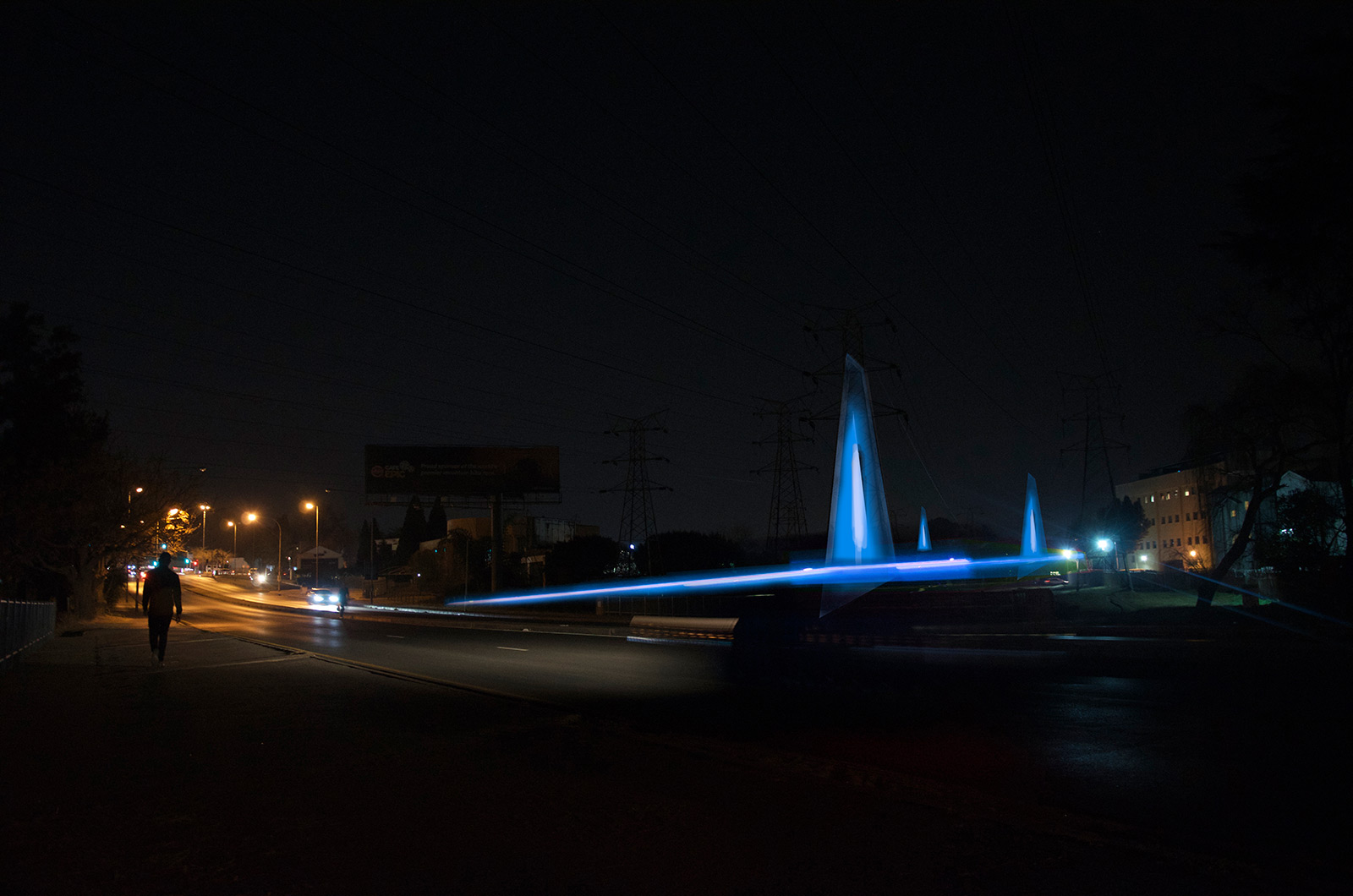 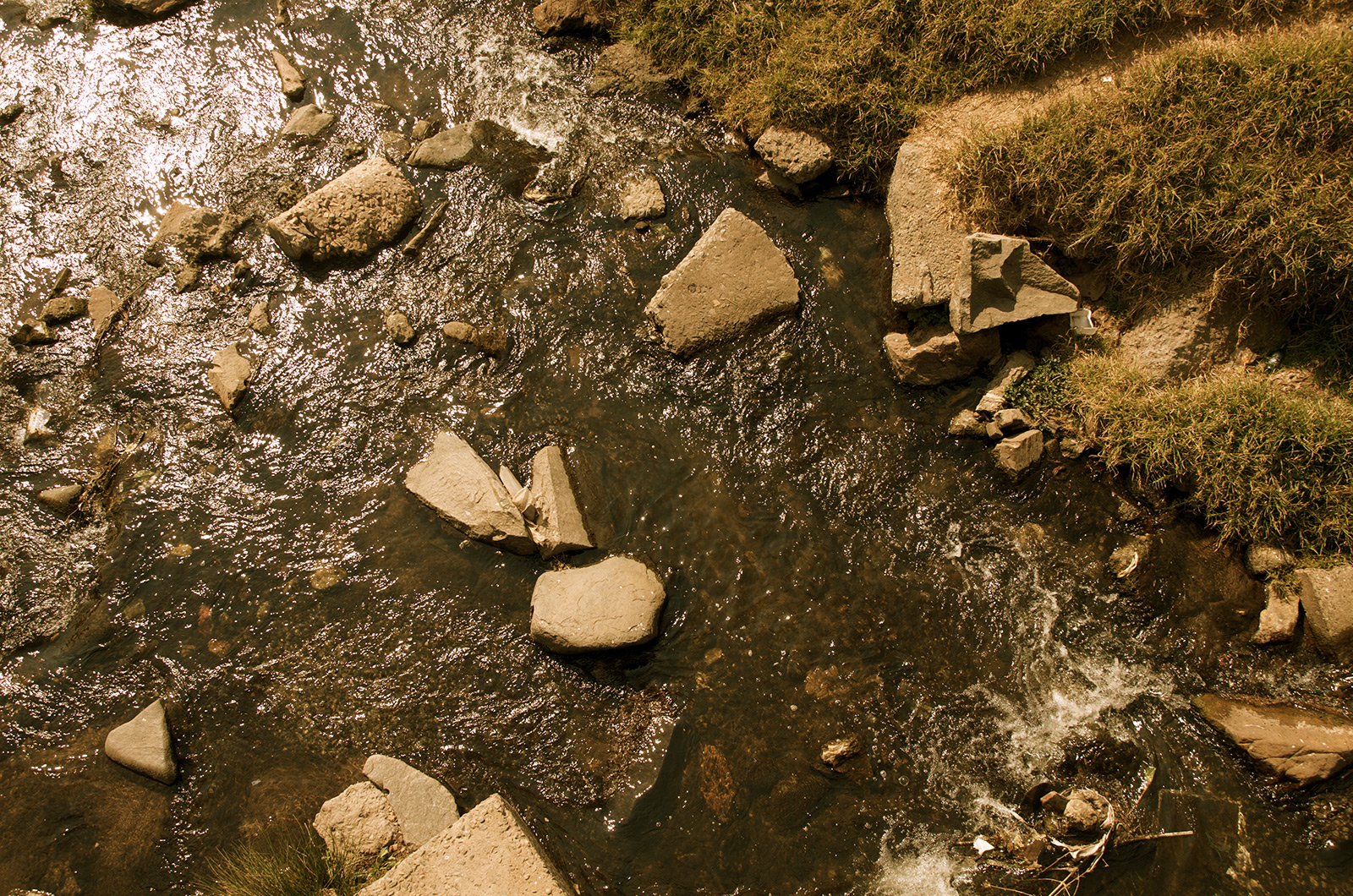 This project is located on the Braamfontein Spruit, part of a larger public park that runs along a river system widely con­sidered to be one of the longest public parks in the world. The intervention area is located off Jan Smuts Avenue where the park separates the upper class area of Craighall and the mid­dle class area of Randburg. Here the homeless live under the bridge that crosses the spruit and so within one area we have a micro-community across the socioeconomic spectrum. Can design create shared value between these different people where much fear and mistrust remains? This was our design question that led us on a journey of illumination. Welcome to the Park of Light.

The intervention area has been separated into four general landscapes, namely bridge, stream, floodplain and waterfall. The bridge and waterfall form parenthesis to the site and natu­rally function as entry and exit points. Interestingly at both these points the homeless are found living. The stream / spruit area is a narrow strip of land that accommodates fast pedestrian and cyclist movement. The floodplain is a broad area that is frequently flooded by the spruit during heavy storms. In line with the movement of the spruit’s river water electric­ity cable and pylons are found in rhythmical unison. These iconic pieces of infrastructure could be called the “guardians” of public space in Johannesburg due to them keeping much public space open due to the illegality of building underneath them. The edges of the park are generally hard with residential areas normally responding with a high, protected wall of some kind. The park is seen by these residents not as a place of pleasure but as a vulnerable access point for crime. Properties located along the park are frequently valued as less than their adja­cent counterparts not located on public green space.

This park separates the middle class municipalities of Randburg in the west with upper class suburb of Sandton in the east. If the homeless living in the park are to be included then this site contains people from all three socioeconomic classes. Its inter­ventions should thus be a precedent of bringing these often marginalized and factional groups together.

The park of light’s most iconic feature is its pollution sensing lighting system. This is the first phase of the development and consists of a series of raised pathways, bridges and towers that change colour depending on the toxicity of the immediate air (towers) and river water (pathways & bridges) they surround. This is communicated in real time by coloured light that illumi­nate the structures that are contained within the current elec­tricity pylons that are found on-site.

In terms of air the system monitors green house gases including those that affect human health such as Carbon Dioxide (CO2 ), Carbon Monoxide (CO), Nitrous Oxide (NO2) and Volatile Or­ganic Compounds (VOC). Thus air quality is communicated di­rectly to motorists and other produces of air pollution. In terms of water the system monitors pH, dissolved oxygen, E. Coli, Ni­trates, Ammonium and Phosphates.

This lighting system is powered via a solar and battery system. It’s monitoring data is stored via a cloud based platform that can be accessed by city management in order to know what part of the river or park area is polluted. This intervention can be scaled along the whole river system where the overall shape of the lighting can change to highlight a change in suburb.

This project includes, ecological regeneration, housing for the homeless and urban farming and is part of an overall scheme of sensitively developing the spruit into a non-gentrified but world class public space.