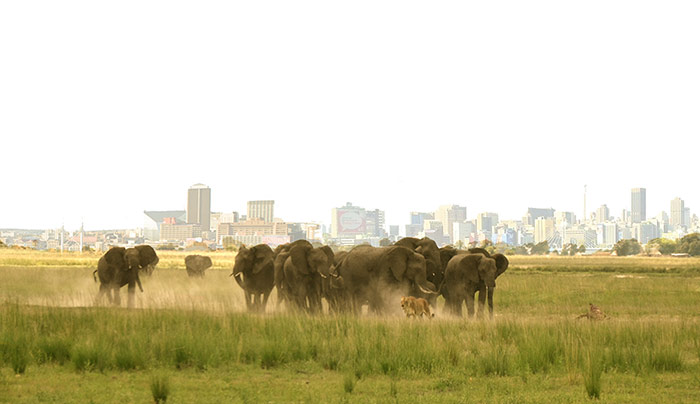 This conceptual project’s brief was to re-imagine the City of Johannesburg if it had to increase its citizen base to endangered wildlife. How might the city have to change to accommodate this?

Being the largest of land mammals, highly intelligent, and threatened with extinction Elephants were seen as a likely “client” for this project. Being the most migratory of the “Big Five” they could create enough tourism exposure for such a large scaled development to be economically feasible.

This wildlife corridor would link the game reserves of Madikwe and the Pilansberg in the North West with a route across the Magaliesberg Mountains through the City of Johannesburg. The route would then link from Johannesburg to the southern part of the Kruger National Park. Elephants are migratory animals and are therefore not well suited to fenced conservation areas, their migrations are sometimes longer than 500km.

With African cities growing at a rapid rate and conservation areas increasing becoming “islands” surrounded by urban development wildlife corridors such as these must become more common. This is one attempt at suggesting what could provide a regenerative ecological future for a city that was founded on the ecological destruction of industrial mining.